The mystery of the origin of the Bordeaux wine bottle and why it is known colloquially as the Frontignane is a subject of considerable interest, and not only in France. The excellent twin papers by Dominique Dabas & André Orsini, De la bouteille bordelaise[1], have helped to popularise the mystery and provide clues to the identity of the early Frontignane. It is from these papers that I drew inspiration to conduct my own search to uncover the origins of the wine bottle that was destined to conquer the world.

Initially I set out to find early French ‘black glass’ bottles that could provide clues to the identity of the earliest Frontignanes. In the process I stumbled across what may actually be one of them (see picture).

The evidence for the illustrated bottle being an early Frontignane comes from the first of the Dabas & Orsini papers, as well as archaeological investigations conducted in Quebec. Because most of the early 18th century trade with New France originated from Bordeaux and nearby ports, including the wine trade[2], the archaeology of Quebec provides a unique window into the evolution of wine bottles manufactured in the Bordeaux region, including the Frontignane.

To be convincing, any explanation of the origin of the Frontignane must be consistent with the historical accounts, including those in the Dabas & Orsini paper. Accordingly, where relevant, each part of my argument is prefaced with an excerpt from the paper.

“… we discovered in the accounts of the Bourg glassworks (1734 to 1739) the following mention: “November 14, 1735: Received from Mr Letellier, trader of Bordeaux, the sum of 3900 Pounds as payment for twenty thousand eight hundred frontignane bottles of a half pot… ”

I estimate the age of my bottle at c1730 plus or minus 5-10 years, but that is not the only evidence I rely upon. It is also very similar to two bottles (#467 and #517) “à col court, épaule tombante” (short neck, sloped shoulder) recovered from an archaeological site in Quebec City and independently estimated to date from c1720[3]. Bottle #467 is pictured below and Table 1 compares the dimensions of the three bottles. 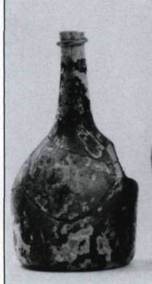 The only significant difference between my bottle and #467 is in the height of the neck and body, which results in the different capacity.

Pascal Birolleau, in his thesis on the Guyenne glassworks(1) specifies that, in 1785, the most sought after product was “the large frontignane weighing 20 to 22 ounces, with a gauge of three roquilles, eight of which make a Bourg pot, equal to the Bordeaux pot, or 0.8515 litres …”

It is possible that the capacity of the Frontignane changed in the 50 years between 1735 and 1785, but so far I have found no evidence for this so I am assuming it remained the same. If Pascal Birolleau’s account is accepted then the large Frontignane had a very small capacity (3 / 8 x 0.8515 litres = 319.3ml).

My bottle holds 796g of water when filled to the brim, or approximately 796ml, assuming one millilitre weighs one gram. If an allowance is made for a cork, the capacity is almost exactly the calculated capacity of the large Frontignane.

One roquille in this case corresponds to what was more commonly known in the 18th century as a demiard or demi-septier (one roquille was normally half of one demiard or demi-septier). This apparent confusion of terms was not unusual in France. For example, the same English source states that “The pot is divided into 2 chopines or 4 demi-septiers”, indicating that 1 pot = 2 chopines = 4 demiards = 8 roquilles, when more commonly the units of volume were expressed as 1 pot = 2 pintes = 4 chopines = 8 demiards = 16 roquilles.

It is possible that some of this confusion may be due to the French government’s failed attempt in 1735 to enforce the Paris pint (pinte de Paris), equal to 0.93 litres, as the standard wine measure throughout France. Incidentally, this might also explain why some early Bordeaux wine bottles seem to have a capacity closer to 900ml than half of one Bordeaux pot (1.045 litres).

… during the controls carried out by the jurade [the royal governing institution] of Bourg in the glassworks of the city, on February 22, 1741: “I certify that all the bottles that in fact are there are at least of the weight carried by the order of the council of 20 Dec. last, except only for those which the glassmakers of this place do make for the wine of Frontignan, of an extraordinary gauge, and which are made to weigh only approximately 20 to 21 ounces; one does not sell these last ones to the public and distributes them only in favour of the merchants who trade in the wine of Frontignan and require them in the form and of the weight that they make” (13).

I acquired my bottle from a place inland from the port of La Rochelle. The bottle was dirty and had not been in a collection so it is more likely to have originated from that region.

Perhaps because New France was first settled from south-west France, most trade with the French colonies was based out of Bordeaux and La Rochelle[5], and most of the wine sold in the colonies came from either south-west France, Spain or Portugal[6]. The bottle factories around Bordeaux also supplied export markets, so it is likely that French black glass bottles found in Quebec originated from the Bordeaux region. Furthermore, any Bordeaux wine bottles excavated in Quebec can be reliably attributed to the period 1723-1760, because the trade in French goods abruptly ceased after the British conquest of New France in 1760.

At one time I thought my bottle might be an early Champagne bottle because it looks similar to two early Champagnes pictured in the book by Willly Van Den Bossche [plates 144(1) and 259(1)]. However, these bottles have quite different weights and capacities so the resemblance is likely to be superficial[7].

Figure 11 of Camille Lapointe’s book illustrates dark green bottles in the classic French ‘flowerpot’ style (pot-de-fleurs) in three different sizes: 500ml, 825ml and 1 litre. The 825ml size is similar to the calculated capacity of the large Frontignane (783.4ml), my bottle (796ml) and a c1820-30 sealed Bordeaux wine bottle in my collection (820ml). The seal on this last bottle reads “Grave” (a prestigious Bordeaux wine region at that time) confirming that it is a true Frontignane.

It is tempting to speculate that Frontignane originally meant a triple demiard or three-quarters of a pint, which at some point became three quarters of a litre (750ml) as it is today. Interestingly, the average reported capacity of the four full-size sealed Bordeaux wine bottles pictured in Willy Van Den Bossche’ book is 752.5ml [see plates 149(4), 266(2), 266(3) and 267(3)]. These bottles all date from the period 1858-1874, well after metric became the norm.

If this theory is correct then the style of the earliest Frontignanes could have varied significantly, provided that the capacity remained the same. However, late 18th century Frontignanes are always an elongated flowerpot shape [for example, see Willy Van Den Bossche plate 149(1)], which almost certainly evolved from a squat flowerpot form. The Quebec archaeological record confirms that a squat flowerpot shape already existed in 1745[8], but the shape of the Frontignane before then is uncertain.

It has been speculated that another c1730 bottle similar to my bottle is “probably an example of the early flower-pot form” [9]. Although my bottle and bottles #467 and #517 are all slightly larger at the shoulder than the base, further research appears necessary to test this theory. If true, it is possible that the Frontignane has always been a flowerpot shape, as well as a triple demiard capacity bottle.

The only historical account of the Frontignane I cannot yet fully explain is the 1735 reference to “frontignanes d’un demy pot” (Frontignanes of half a pot). As discussed, half a Bordeaux pot is a pint or a chopine, depending on the historical source, and equivalent to 1.045 litres – not 3 roquilles as was the reported capacity of the large Frontignane in 1785.

For a while I thought that my theory about the Frontignane being a triple demiard bottle must be flawed until something caught my attention that made me wonder whether there is more to this historical account than first meets the eye. The book by Camille Lapointe includes an analysis of deceased estates (les inventaires après décès), mostly from the first half of the 18th century. At least one inventory refers to a black glass bottle with a short neck, a capacity of one pint comprised of three demiards, and which does not take a pint (“qui ne tient pas pinte”)[10].

This contemporary reference to a bottle that apparently looks like a normal pint bottle but does not hold a pint sounds remarkably like my bottle, which looks like a pint bottle (i.e. #467) except that it has a capacity of three demiards.

This interpretation is supported by the pioneering paper by Bernard Ducasse examining the origins of the Bordeaux wine bottle[11]. According to the author:

When the Jurade of Sainte-Foy, in 1735 and 1748, banned « Heavy bottles of England or Rouen », it was specified that the authorised bottles are to be made three quarters of a pint [i.e. three demiards] …

Sainte-Foy is an appellation in the eastern part of the Bordeaux wine region known principally for its sweet white wines.

I cannot yet say for certain that my bottle is a Frontignane but so far it appears to satisfy all of the requirements to be one. Only time and further research will tell whether it is.

In this paper I have tried to avoid discussing the fascinating history of Frontignan wine so as not to unduly confuse matters. In my next paper I will discuss the evidence for a possible early Frontignan bottle from approximately the same period.

[4] see definition of “Pot” in The Cyclopædia; Or, Universal Dictionary of Arts, Sciences, and Literature, Volume 28, Abraham Rees, 1819

[5] The Pattern of French Colonial Shipping to Canada before 1760, James S Pritchard, 1976

[7] Champagne bottles must be strong to tolerate a high internal pressure and so are always heavy bottles.